Red Mountain is the smallest appellation in Washington State at 4,040 acres. Due to warm temperatures, red grape varieties dominate on Red Mountain. Its name is somewhat of a misnomer as it is neither red nor mountainous, with elevations ranging from 500 feet to 1,500 feet.

Jim Holmes, a pioneer in Washington winegrowing, has been tending grapes on Red Mountain since the 1970's, and continues to turn out some of the State's best fruit.

Situated at the base of Red Mountain, the vineyard receives the same heat and nighttime wind that you'll find at nearby vineyards. One main difference in the vineyard is the canopy of some of the more recent plantings (1994-on): vines are trained on a fan system while most of the others are planted on a bi-lateral cordon. While this system creates a larger canopy, it shields the grapes from the intense Red Mountain heat, allowing sugar maturity and physiological maturity to develop synergistically. His site also retains balanced acidity in the grapes.

This fruit gives wonderful density and complexity to our wines, and we enjoy a range of fruit from this site: two acres of Cabernet Sauvignon, one acre of Merlot, and lesser amounts of Cabernet Franc, Mourvedre, Syrah and Petite Verdot are destined for Betz Family Winery. The Cabernet Sauvignon, Cabernet Franc and Merlot are typically black, with ripe tannins that offer a silky palate feel. Plenty of complexity to go along with the mouthfeel as well: black cherry, currant, black olive, cedar and pencil lead notes. The Ciel du Cheval Cabernet Sauvignon is the base to our Père de Famille, and these grapes bring power to our Clos de Betz. The Mourvedre, a Southern Rhone variety, is particularly exciting and makes its debut in our 2004 Besoleil.

With the 2003 harvest we added Petite Verdot and Syrah to the varieties we get from Ciel du Cheval. 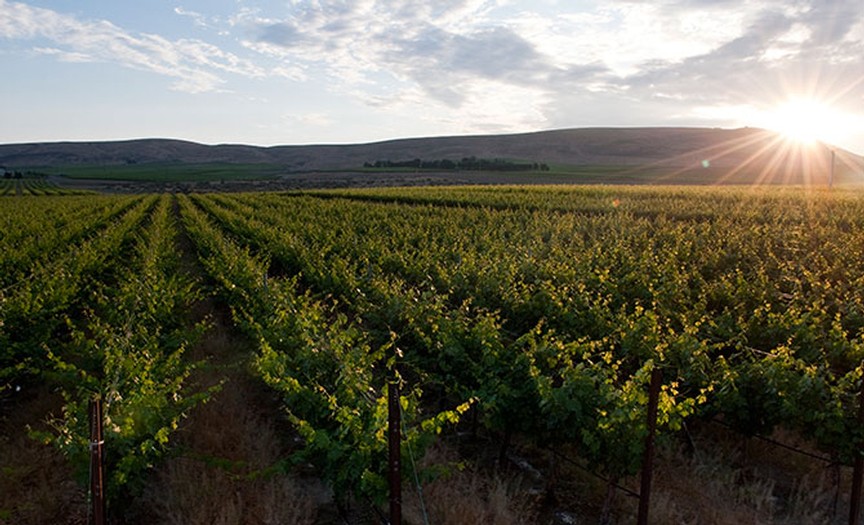 Acclaimed as one of the world's outstanding vineyards by Wine & Spirits Magazine, a few specific rows of Cabernet Sauvignon in both the new and old blocks at Klipsun Vineyard are have been designated for Betz Family since 1997. Planted to mostly bi-lateral cordon, the vines have a tight canopy with a focus on keeping the foliage to a minimum, especially on the morning side of the vine. Klipsun Vineyard is a naturally warm site with, this gives great sun exposure to both the vines and clusters, providing consistent ripening and keeping disease threat low. The Cabernet Sauvignon contributes tannin, structure and backbone to our wines. On the nose we find the black fruits and deep cherry that Red Mountain is known for. This is wonderful fruit, loaded with intensity and power. 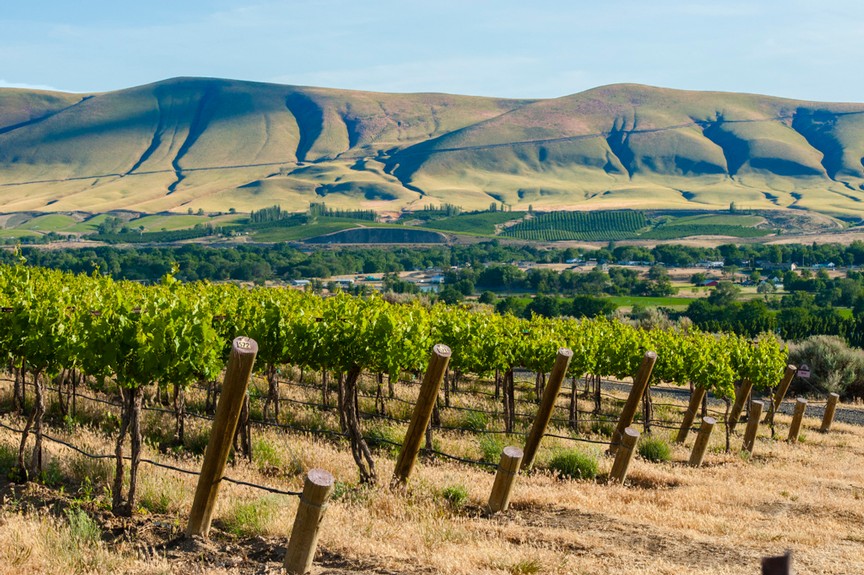 Kiona Vineyards - "Ranch at the End of the Road"

We contract Syrah grapes from Scott Williams of Kiona Winery, one of the highest altitude sites on Red Mountain. Because of its altitude and heat accumulation, the grapes here always ripen deeply, providing us with the material to craft a hedonistic Syrah with a high 'yum' factor. It forms the foundation of our Syrah La Côte Rousse. Although the harvest can come early compared to other sites, we get the slight shrivel which gives Syrah its varietal markers of smoke, licorice and sheer concentration. We find an inviting tobacco note at the beginning, followed by spicy black pepper, and a round and lush finish. This site delivers wines that are plush and can stand-alone: they require minimal work in the cellar and at the blending table.

With the 2005 harvest we'll add some of Kiona's acclaimed Cabernet Sauvignon to our mix. Scott and his family have grown the variety for some of the best wines made in Washington. 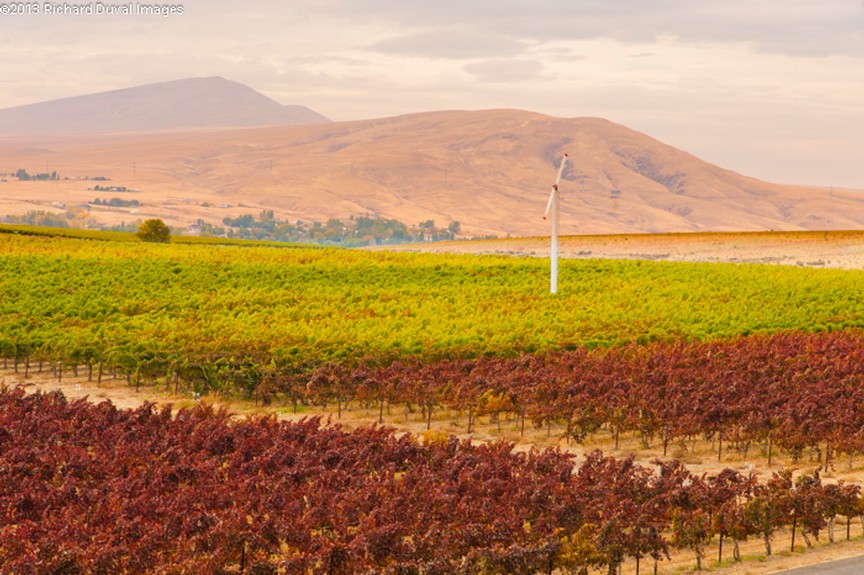 Kiona Vineyards - "Heart of the Hill"

This journey has been in the works for a decade: Scott Williams of Kiona Vineyard, with whom we have worked since 1999, planted the first Cabernet vines at Heart of the Hill in 2006, with additional vines added each season afterwards. We’ve used the grapes in our Pere de Famille blend since 2010, and it formed the foundation of the stellar 2012 Le Parrain.

Why is this site so unique?  We’re not quite sure!  It shares certain physical traits (heat accumulation, high light intensity, low rainfall and cool nighttime temperatures near harvest) with other acclaimed vineyards midway up Red Mountain.  It slopes gently due south, sandwiched roughly between Ciel du Cheval, Col Solare and Hedges Estate vineyards, with weak/high calcium soils and a little less wind than vineyards farther down the slope.  But there’s a je ne sais quoi here that results in wines with character unlike anything we’ve had in our cellar before.  Give us another 50 vintages and we will answer the question “why”!

Today we farm 4 separate blocks of Cabernet Sauvignon, two each of clone 2 and clone 8.  (Even though these blocks touch each other, the wines from each are different!)   Fortunately, we have enough of this vineyard’s fruit to maintain its formidable contribution to our Pere de Famille Cabernet Sauvignon, as well as to make this Heart of the Hill Cabernet Sauvignon on a continuing basis. 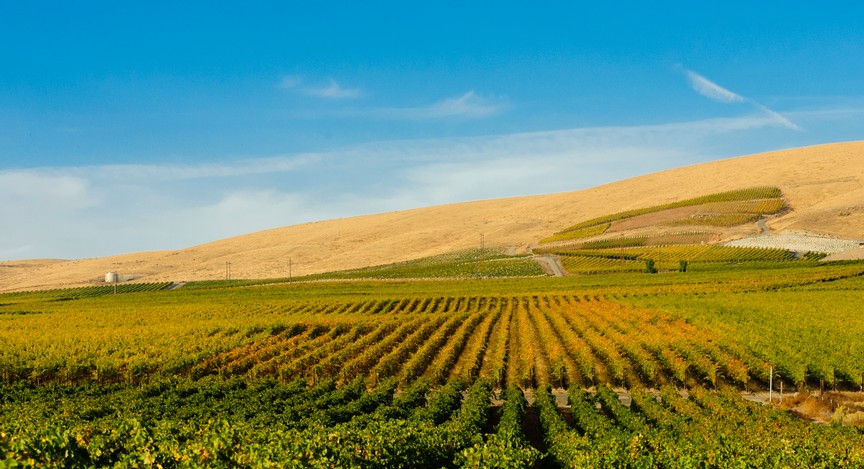 Due to limited production our Mailing List is currently closed. We encourage you to join our Wait List. We offer wines to our members twice per year, Bordeaux-styled wines in the Spring and our Rhone portfolio in the Fall. After our mailing list has had the opportunity to purchase wines, we offer any remaining wines to our waiting list.